- 1 -
Thanks for the encouragement on Wednesday's post. The succulents I planted are still alive which is impressive in this house. I tend to kill succulents faster than they would die naturally if you dumped them out.


- 2 -
I've finally gotten my jog back on. I want to train for the Congress Avenue Mile in Austin, but I tend to get injured whenever I train for races. I can jog and jog and jog but as soon as I think the words "training plan," I swear an old injury will start twinging.

Kallah posted her injury proof running plan. For my runner readers (especially those with experience jumping back into running postpartum): what do you do to avoid injury?


- 3 -
Jake is seeming so much older to me. I suppose having a second baby will do that to a mother. 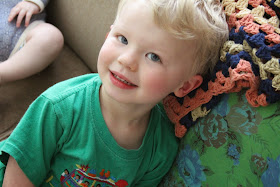 The other day he was outside arguing with his imaginary friend about who's turn it was.

When I hug him, he's taken to patting my head and saying: "You're a good girl, mama."

He fake laughs a lot, basically whenever we laugh about something he fake laughs and then asks, "Excuse me, Papa, why is that funny?"


- 4 -
But older seeming or not he still mispronounces things - and mispronunciations are among the best parts of parenting.

And though it's been a long time since we've used "bluebabies" or "strawbabies" in our fruit smoothies, and "roghut" may now be a more correct if laborious "yooohgerrt," no, Jake, this is Mass, this is not a "bathtizing."


- 5 -
Lucy June is ever still a mama's girl. This is still the best and worst thing about my life. 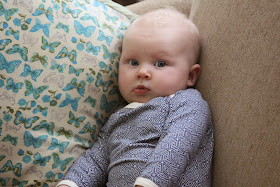 I suppose that's why God made every phase of parenting so temporary.


- 6 -
We're about to run out of my favorite diaper cream

I got outfitted with it via baby showers when Jake was born and I LOVE it, but now that I need to replace it, I'm royally balking at the price. $9.00 an ounce!?! That's like $4.50 per tablespoon!?

I'm a bit of a DIY for better or worse type, so I thought I'd give it a try.

The two main ingredients are olive oil and beeswax, and since my babies really aren't that rashy, I decided to make do with just those two and skip the fancy calendula-type stuff. I didn't intend to make very much of it, but my ratio was very off at the beginning, and as I attempted to save my efforts, my batch kept getting bigger and bigger until I had a cup and a half of the stuff.

My rookie efforts were pretty messy. Simply melting the ingredients together didn't get me the consistency I wanted, so I kept graduating my mixing tools from spoon to fork to whisk to immersion blender. Ultimately, I was left with a usable product that seems like it will work almost as well my beloved diaper cream...and enough of it to last until Lucy June turns 12. 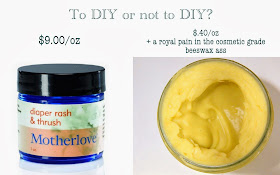